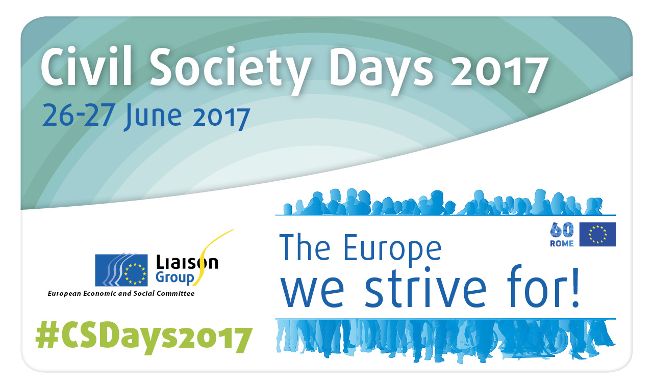 On 25 March 2017, Europe celebrated the 60th anniversary of the signing of the Treaties of Rome. However, what should haven been a moment of celebration actually revealed the shortcomings and limitations of the EU integration process. At least, all of Europe is now at stake.

Commission President Jean-Claude Juncker has put forward, in his ‘White Paper on the future of Europe’, five scenarios for an EU at 27, hoping to stir a debate leading to the European Council meeting of December 2017and to relaunch the European project.

It’s time for civil society to raise its voice.

Civil society organisations are in a key position between citizens and European institutions, giving them the power to offer new perspectives for the Union and to propose concrete solutions for the future of Europe.

The Civil Society Days 2017 take up this challenge.

“The Europe we strive for” will be organised civil society’s call for a new political impulse to relaunch the EU on the basis of our values and roots and also give a clear commitment of civil society organisations to forge ahead.

Topics discussed:
> Populism, and how to develop a counter-narrative through education and culture;
> Technological revolution: transforming work, minds and society;
> Empowerment of civil society organisations, rights and the shrinking space for civil society;
> Urban and rural dimensions, moving towards more social and territorial cohesion.

All these themes central for the DANDELION project, aiming at promoting research results in IIRS and SSH